Error: Twitter did not respond. Please wait a few minutes and refresh this page.

This blog by Tanvi Swar is licensed under a Creative Commons Attribution-NoDerivs 3.0 Unported License.

Oatmeal is the best thing ever. Seriously. It’s stupidly versatile because it’s basically like a blank canvas and you add whatever you want to make it yours. Pumpkin spice, chocolate, banana nut, whatever. Not that disgusting dino-eggs, flavoured, sugary stuff from the store, though. That shit is full of sugar and while yes, sugar is amazing, I don’t want to eat it unless it’s in the form of a cupcake or something that’s really worth it.

Oatmeal is also a complex carb that’s full of soluble and insoluble fiber that’s great for pooping, great to keep your sugar levels low and all that good stuff. It also fills you up like crazy. I eat a bowl of oatmeal at, say, 9 and I’m not hungry until well after noon.

I made this sugar-free oatmeal that was surprisingly delicious. I don’t even know how I had this genius idea, I’m sure sometime in my life I’ve seen something that inspired it. Anyway!

All of the sweetness in this oatmeal comes from the banana. You have to make sure that the banana you use is ripe. Those greenish yellow firm ones don’t really work. They have to be soft and sweet. Yellow. Possibly with some freckles.  Basically like the one in the pictures.

Here are the rest of the ingredients

I cook all of my oatmeal in milk because why the fuck not, life is short. Pour about half a cup of oatmeal into a cup and a half of water. Let it sit on medium heat for a while. In the mean time, roughly chop your nuts. Hahahaha. Sorry. Anyway. Slice up your banana. HAHAHAHA. Oh my God, sorry. Slice up the banana. Put half the banana slices into the milk and oatmeal that should be heating up nicely by now. Two drops of vanilla extract. When your oatmeal starts to thicken, add your cocoa powder and cinnamon and stir. When it’s just thick enough, take it off the heat and mix in the nuts and the rest of the banana.

The second time I made this, I added a little bit of sugar-free, all natural peanut butter and it made it all the more delicious. 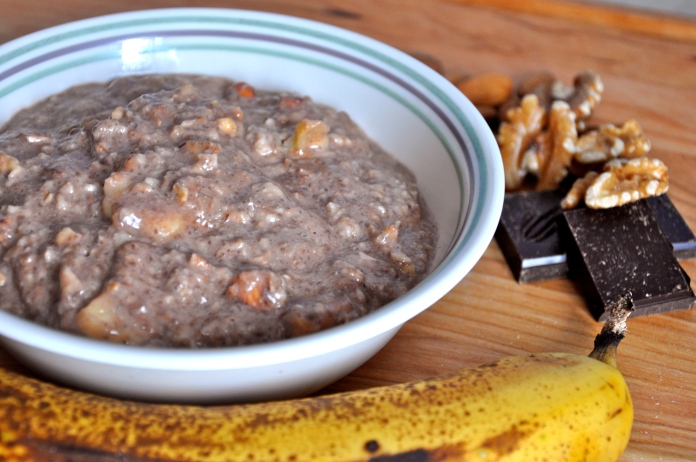 There’s so many ways to make oatmeal, it’s ridiculous.

Here are some ideas in case you’re absolutely useless. Each of these can be sweetened with a banana, agave, stevia, maple syrup, brown sugar or just regular sugar.  Add chia seeds, hemp, flax for extra crunch, fiber and other nutrients I’m too lazy to look up right now.

Pieces of cake + sprinkles
I don’t know, you could get pretty crazy with oatmeal! 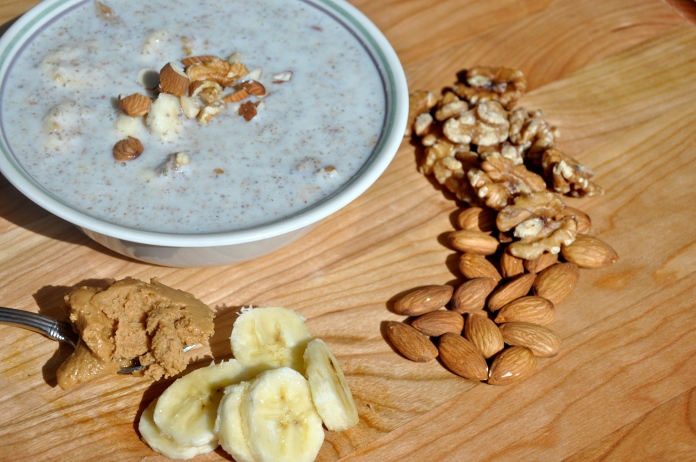 I’ve even heard of some people in India making savoury oatmeal. Mind blowing concept, but since oatmeal is tasteless, I can see how it would work if you cooked it in water.